Moonscape, with an American Flag 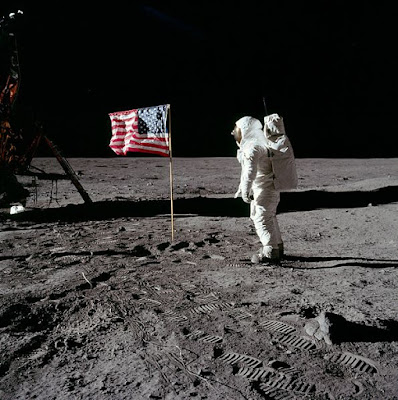 Buzz Aldrin with U.S. flag on the Moon. (mission time: 110:10:33) Buzz salutes the U.S. Flag. His fingertips are visible on the far side of his faceplate. Note the well-defined footprints in the foreground. Buzz is facing up-Sun. There is a reflection of the Sun in his visor. At the bottom of Buzz's faceplate, note the white 'rim' which is slightly separated from his neckring. This 'rim' is the bottom of his gold visor, which he has pulled down. We can see the LEC straps hanging down inside of the ladder strut. In the foreground, we can see the foot-grabbing loops in the TV cable. The double crater under Neil's Lm window is beyond Buzz and the LM shadow.