Zones of Exclusion: Pripyat and Chernobyl 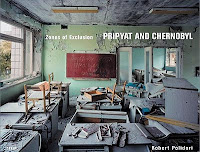 Zones of Exclusion:
Pripyat and Chernobyl
By Robert Polidori
Published by
Steidl & Pace/MacGill

This book — shot in only 3 days — presents an unexpected look at what remains of Chernobyl and the town of Pripyat, Russia.
In the 11 days following the Chernobyl catastrophe on April 26, 1986, more than 116,000 people were permanently evacuated from the area surrounding the nuclear power plant.
Declared unfit for human habitation, the "Zones of Exclusion" includes the towns of Pripyat (established in the 1970s to house workers) — and Chernobyl.
In May 2001, Robert Polidori photographed what was left behind in this dead zone. His richly detailed images move from the burned-out control room of Reactor 4 — where technicians staged the experiment that caused the disaster — to the unfinished apartment complexes, ransacked schools and abandoned nurseries that remain as evidence of all those people who once called Pripyat home.
Nearby, trucks and tanks used in the clean up efforts rest in a car graveyard. Some are covered in lead shrouds — and others have been robbed of parts. Houseboats and barges rust in the contaminated waters of the Pripyat River. Foliage grows over the sidewalks — and hides the modest homes of Chernobyl.
In his large-scale photographs, Mr. Polidori captures the faded colors and desolate atmosphere of these two towns. He produces haunting documents that present the reader with a rare view of not just a disastrous event — but a place and the people who lived there.

Robert Polidori was born in Montreal in 1951 and lives in New York City. He has exhibited photographs in Paris, Brasilia, New York, Los Angeles and Minneapolis.
He is a regular contributor to The New Yorker — and has been featured in Geo, Architectural Digest Germany andNest Magazine.
Mr. Polidori has received numerous honors, including a World Press Award for his coverage of the Getty Museum and two Alfred Eisenstaedt Awards for his work in Havana and Brasilia.