A cabin in a loft

A Cabin in a Loft in Brooklyn is a two-bedroom loft in Bushwick, Brooklyn, designed and built by Katz Chiao.
Conceived of as houses within houses, the cabin and treehouse serve as private sleeping cabins, each with its own semi-private garden set off from the shared living space.
The cabins are located in a former textile factory building with exposed brick walls and large windows. Rather than building floor-to-ceiling walls to divide the apartment into two bedrooms, the pitched roof of the cabin and elevated floor of the treehouse maintain the openness and character of the loft while also allowing sunlight to fill the entire space. As a result, living in the space can feel like living outdoors, in a small community of two houses. Windows in the cabin and treehouse ventilate the rooms and offer views to the rest of the apartment. The large entrances to both cabins, set slightly back from the building’s windows, look out to the sky and down the street.
The treehouse is lofted above the ground and houses a study and storage area below. The cabin has a storage space built into the raised floor. A garden and a place to hang clothes occupy the small semi-private area that is formed between the cabin entrance and the windows.
The shared open space of the loft, between the two houses, consists of a living area, kitchen, and large table for eating and working. 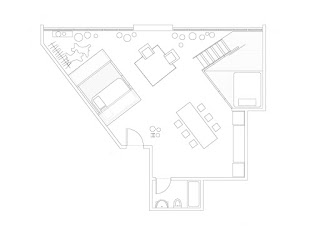 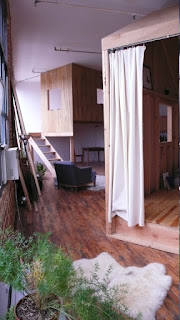 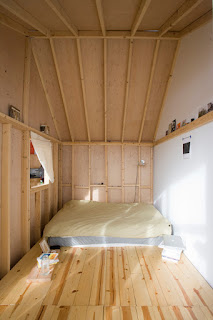